"It is the lives we encounter that make life worth living."
(Guy de Maupassant, French narrator and novelist) 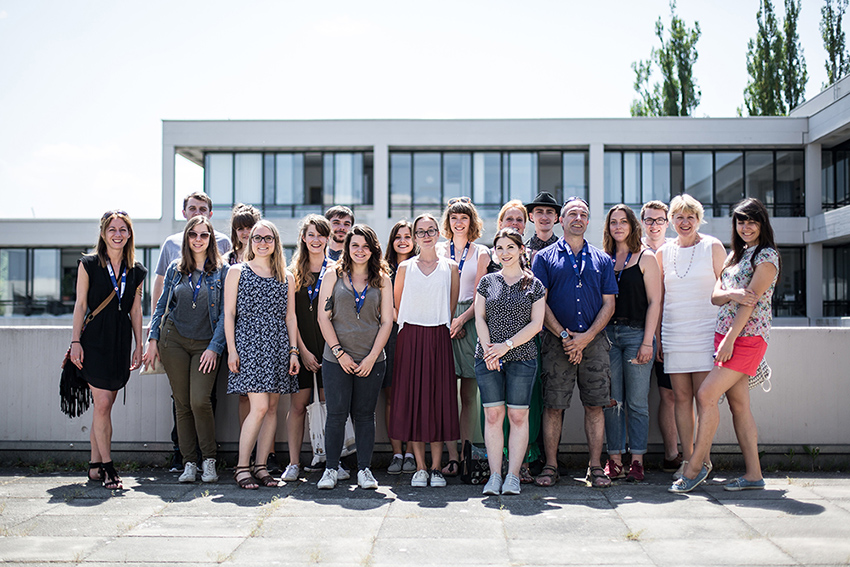 Gerlinde Frammelsberger, Director of Studentenwerk (second from the right)
with the participants of the 2017 Student Exchange

The participants of the 2017 Student Exchange had good reason to look forward to a reunion. Under the motto "Rencontre - Encounter", Studentenwerk Niederbayern/Oberpfalz organized the return visit of a photography exchange. The intensive work on their photo projects sure helped to make the students and responsible persons grow closer.

Shootings at the most beautiful places in Regensburg and the region
In 2016, a group of photo enthusiasts from Landshut, Passau and Regensburg travelled to the Crous Clermont Auvergne, the equivalent of Studentenwerk in Clermont-Ferrand. Now it was time for the return visit: From late May until early June, students from Regensburg's twin city were guests at Studentenwerk. It was concentrated, creative work which flavored the exchange week, with a focus on photography. The French and German students had previously submitted concepts for their photo projects, which they now implemented under artistic direction. The program was a skillful blend of exciting excursions and professional photography: The shootings took place at important sights and in the most beautiful places in and around Regensburg. Whether UNESCO World Heritage Old Town Regensburg with Stadtamhof, Valhalla or Donaustauf Castle: The photo concept and the location served as an inspiration for each other. The sound and film media studio of Studentenwerk provided the ideal conditions for studio recordings and image processing. Whether it was a work or recreational program, a shared meal in the cafeteria, or the improvement of their Photoshop skills: The participants were spending almost every waking minute of the day in each other's company. Everyone agreed that their artistic work was inspired by team spirit and their many exciting encounters.

Anniversary exhibition
The results of the photo projects from the two-year exchange program will be available for viewing in 2018/19: During these years, Crous Clermont Auvergne and Studentenwerk will celebrate their 40 years of partnership. An anniversary exhibition in Clermont-Ferrand and Regensburg will show the photo projects of the participants.

Background
For nearly 40 years, Studentenwerk Niederbayern/Oberpfalz and Crous Clermont Auvergne have been organizing annual student exchanges. They visit each other in turns: German students going to Crous Clermont Auvergne one year and French students from Clermont-Ferrand coming to Studentenwerk Niederbayern/Oberpfalz the other year.

More pictures of the 2017 Student Exchange: 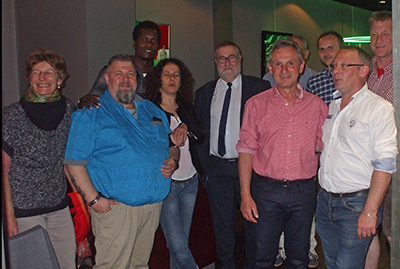 Jean-Jacques Genebrier, Director of Crous, (fifth from the left) shown with the
Studentenwerk's facility managers and Crous staff

Interesting sights, lots of French flair and a lively exchange: During April 3rd to 7th, 2017, the facility managers of Studentenwerk Niederbayern/Oberpfalz visited their French colleagues at the Crous Clermont Auvergne in Clermont-Ferrand.

Arrival at the Crous
Last year, the caretakers of the Centre régional des œuvres universitaires et scolaires (Crous) Clermont Auvergne had the opportunity to get to know the local Studentenwerk. The return visit also had a motto: "Facility managers - strengthening intercultural skills". In April, the colleagues from Studentenwerk travelled to Crous Clermont Auvergne for a week. Jean-Jacques Genebrier, Director of the Crous, extended a warm welcome to the German guests on the first day. The lectures and guided tours provided the colleagues from Studentenwerk with an immediate good insight into the work of the Crous.

Highlights from architecture and nature
The Crous' facility managers showed their guests various residential complexes, including the Cézeaux campus. The condition of the facilities ranges from brand new to in need of renovation. Olivier Bertrand, head of university catering, also gave the group a guided tour of the hosts' stylish cafeterias. The main attraction of the second evening was one of Auvergne's particular highlights. Clermont-Ferrand is nestled behind a chain of 80 volcanoes which reaches all the way to the southwest of France. The fascinated exchange participants had the opportunity to visit the largest of the volcanoes, the Puy-de-Dôme.

French gastronomy and hospitality
The Crous' cafeterias were not just part of the sightseeing tour. The colleagues also had ample opportunity to sample the delicious fare served by local university gastronomy. Whether shopping tours hunting for typical French delicacies, congenial pub visits or a dinner in an upscale restaurant: The hosts gave their visit excellent opportunities for cultural insights, communication, and contact.

The bottom line: Can't wait for next time!
All participants felt that their shared week was a great success. The great atmosphere, the wonderful shared times and the resulting lively exchange of experiences were an inspiration to Studentenwerk's team. "Facility managers – strengthening intercultural skills": The exchange's motto was its program!

Background on the partnership with France
Since 1979, Studentenwerk Niederbayern/Oberpfalz has been associated by a Partnership with Crous Clermont Auvergne. This partnership is based on the town twinning between the towns of Clermont-Ferrand and Regensburg which was established back in 1969.

Exchange programs of Crous and Studentenwerk Ndb./Opf. for students and staff take place every two years. During April 3rd to 7th, 2017, the facility managers of Studentenwerk visited their colleagues of the Crous in France. During May 29th to June 2nd, 2017, students from Clermont-Ferrand are visiting Studentenwerk. "Encounter" was the motto of the return visit to last year's photo exchange, where Regensburg students had been in Clermont-Ferrand.